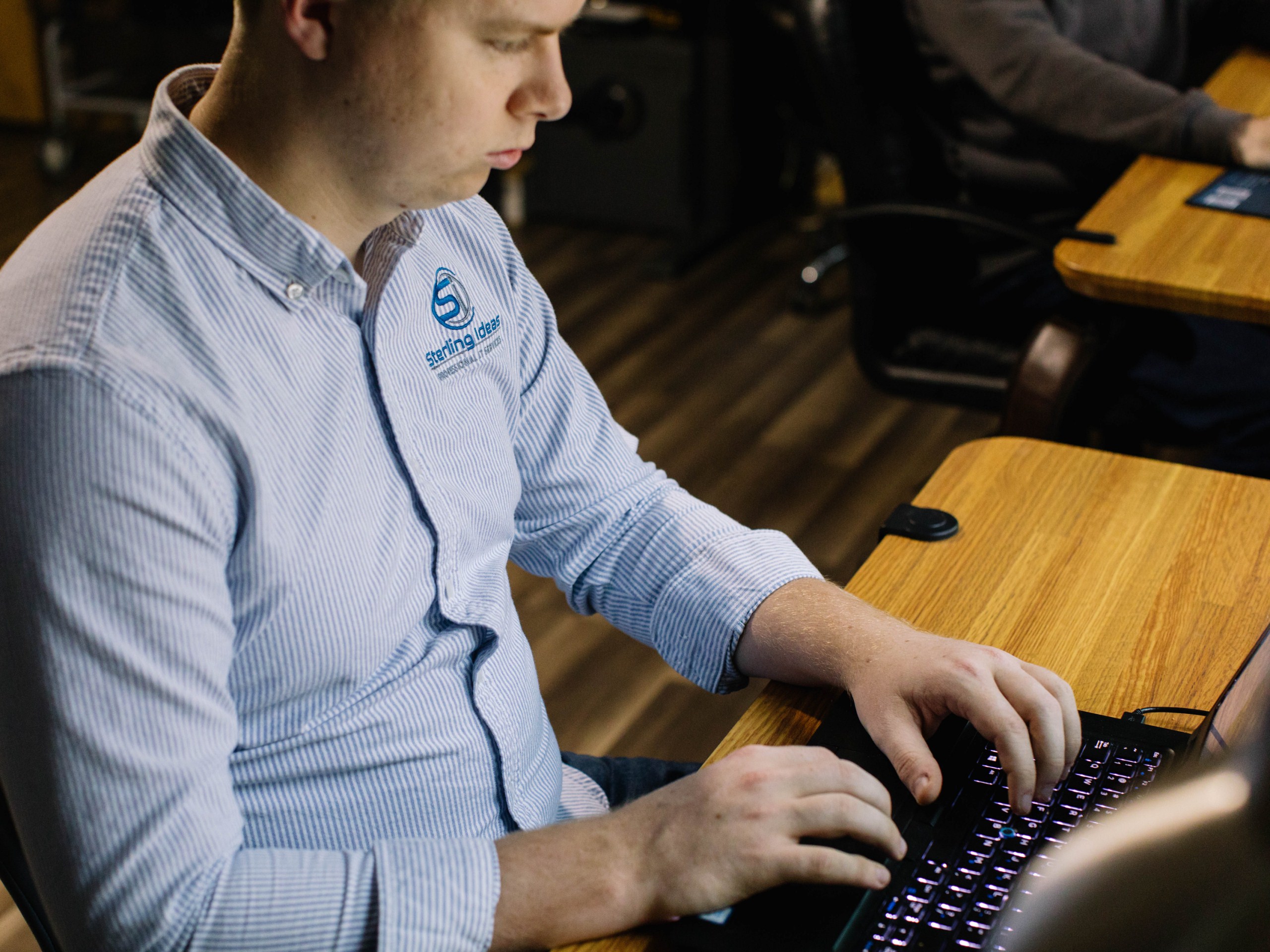 Q: You were the employee to take Sterling Ideas out of one-man-band status. What was it like to enter into a company that had only ever had one employee? What kind of challenges did you face in adjusting into your position?
Sterling: “This job was also my first real job. In college, I had random jobs over the years to make some money, but I’d never had a career. So really, I didn’t know what to expect. And the company didn’t know what to expect of me. There was a learning curve on both sides. Obviously, I was working for my dad, which is different than working for just anybody. There was a lot of getting thrown into the deep end and seeing what happened. When I first started, we weren’t yet an MSP, so we were doing hourly billing, and I distinctly remember being at a client’s office, sitting down, and not knowing how to fix something. I remember that pressure of, “I bet my dad would know what to do, but I can’t get ahold of him, and this client is getting billed for every minute that I sit here.” There’s an internal conflict when that happens because on one hand, I know Dad could fix the problem faster than I could, but on the other hand, me fixing the problem means they get service faster. I remember it hitting me one day that this is why break/fix hourly billing doesn’t work. This is why managed services is the answer.
That’s probably the biggest thing I remember, other than the ridiculous amount of learning that had to happen. I look back, and there are some specific, more complicated things that I remember Dad teaching me—like how VLANs work—and I remember learning that but at the time not even knowing what a server was. There’s just so much to learn, that sometimes I just had to roll with it. I would understand a complex thing but miss a basic, underlying principle. But over time, the gaps started to fill in, and now I can see that it’s all one big puzzle. Like a really big puzzle. Like 2000 pieces. But you have to start somewhere, and step by step, you learn. I just resolved to work harder and longer than everybody else, since I knew I couldn’t work as smart as they could. That has shifted now, but at the beginning, it really was difficult.
Dad had worked alone for the past 19 years, and I had never worked a job like this, so it took adjusting on both ends. Looking back on those days and where we are now, we’ve come a long way.”

Q: It’s no secret that Sterling Ideas is a family business. Do you think growing up around the company and your relationship with Charles helped you to learn the ropes quickly?
Sterling: “I definitely think growing up, I didn’t really know what my dad did. I just knew he was the computer guy, and sometimes I’d see him going into the computer closet at school when I was in P.E. And I’d heard client names or acronyms before, but I never really had context for who they were or the people behind them. And then, I remember in my junior or senior year, Dad had to set up 25 laptops for a project, and he hired me for maybe $200 to set them all up. And I remember thinking “This is a goldmine. This is amazing.” And it took me probably 3 days to set them up because I was terrible at it. Because I was my dad’s kid, I had always been the computer kid in my class, so when my classmates or oftentimes even my teachers had computer questions, I was the one to help out. So I knew some fancy tricks and shortcuts, and I thought I was pretty handy until I started working here and realized just how much there actually was to know.
But Dad and I have similar personalities, and we think in the same ways, so when we have a problem we tend to attack it from the same angle. We don’t always come to the same conclusions because he has more experience than I do, and I tend to bring a different perspective than he does. I think it makes it easy for us to work together. And I think we’re just different enough that we avoid thinking too similarly. Now that we have a whole team behind us, there’s always diversity of perspective which helps balance our team.”

Q: You have watched the company grow from only Charles to an entire team. How have you seen Sterling Ideas, Charles, and yourself change over time? What is most exciting to you about the growth of the company?
Sterling: “Things are very different than when I started. When I first started, we were almost exclusively doing hourly billing. We hadn’t transitioned over to an MSP model yet. I remember Dad had told me that he had this idea for an MSP model that he wanted to look into, but he had taken on a client just before I started because he knew that I would be joining him, so he was working way too many hours a day, just to stay afloat. He was doing way too much to make a big change like that, and that was the case for quite a few months. But then we eventually shifted from billing hourly for time and materials to being a full MSP in just under two years. And even then, it was just me and him. We weren’t really a company. I was just an extension of what he had done alone for so long.
And then Mom started working with us, and we became a company. Like we put flooring in the office and bought desks and monitors and all those kinds of things. Mom did the things that we had neglected because we had been so swamped with work for so long, just trying to keep above water. We hadn’t taken the time to do those things that we now understand actually immensely help our efficiency and production. It seems like that’s when we actually became a company.

The biggest difference to me is that now there are things that happen that are never touched by me or Dad. Just a couple years ago, if something got done, it’s because one of us did it. We had our hands in everything. But now, there are entire swaths of the business that neither Dad or I have to do anything for. We have marketing. We have HR. Sometimes, I’ll just get a Teams message that says something like, “Hey, we have a new website!”, and it’s done, and it’s done right, and it’s beautiful. That’s a huge change, to have people you trust doing what they’re good at to free us up to do what we’re good at.

I feel like Dad hasn’t changed that much since I’ve been here. His role has definitely changed, but his demeanor hasn’t. He’s very patient. He’s a great teacher. It’s been really cool to watch him go from being the tech guy to being the president of a company. From crawling under desks to fix things to writing legal contracts and managing the company itself. The funny thing is, the only reason that’s true is because he was willing to be the guy crawling under a desk for so many years. He put in so many years of hard, lonely, sometimes not fun work, and it’s awesome to see him reap the reward of that. And the mind-boggling thing is that he’s still an enormous wealth of technical knowledge and support.

I feel like I’ve done a lot of growing up since working here. At the beginning, I was a gunslinger. That’s what we call it. I see a problem, I point and shoot. Partially, that was eagerness and a desire to prove my worth. But I’ve learned over the years to take a step back and realize that often, a problem is just a symptom of a more serious underlying issue, and the real way to fix the symptom is not to point, shoot, and throw a band-aid on it, but to fix the underlying issue.”

Q: We are so excited to celebrate 23 years at Sterling Ideas, and each anniversary brings a renewed vigor to our team. So, what are you looking forward to in the next year?
Sterling: “I’m super pumped. The last six months have been huge for us. Obviously, adding Todd to our team has been a big win for our company. Four years ago, we really couldn’t have expected that we would be here, in a position to bring Todd in with all of his expertise. So much has changed, and I’m just so excited for the growth potential we have right now.
So much of this MSP journey that we’ve been on has been delayed gratification. We’ve invested in tools that are essentially freeform, which makes them highly powerful but highly frustrating and requires a ton of front-end time and energy investment. There’s no one way to use them, and there’s no instruction booklet that tells you “do it this way.” We’ve had to painstakingly tailor each tool to our specific needs and security and systems. And all these freeform tools that we have built on each other and are interconnected, so it really is a delicate balancing act to ensure that every piece of our technical world is doing its job for the good of our clients. And for years, we’ve been building our environment in just the right way. I remember spending months just learning one tool that we now use every single day on every single machine we manage. Architecting that kind of environment takes a ton of time and investment, but I feel like we’re right at that tipping point, where we’ve spent the time and money and energy, and we’ve paid our dues, and now we can confidently take on more clients and help more people because we know they’re in the best situation we can give them. We’re at that inflection point where we’ve done all the prep work, and now we can run with it.”