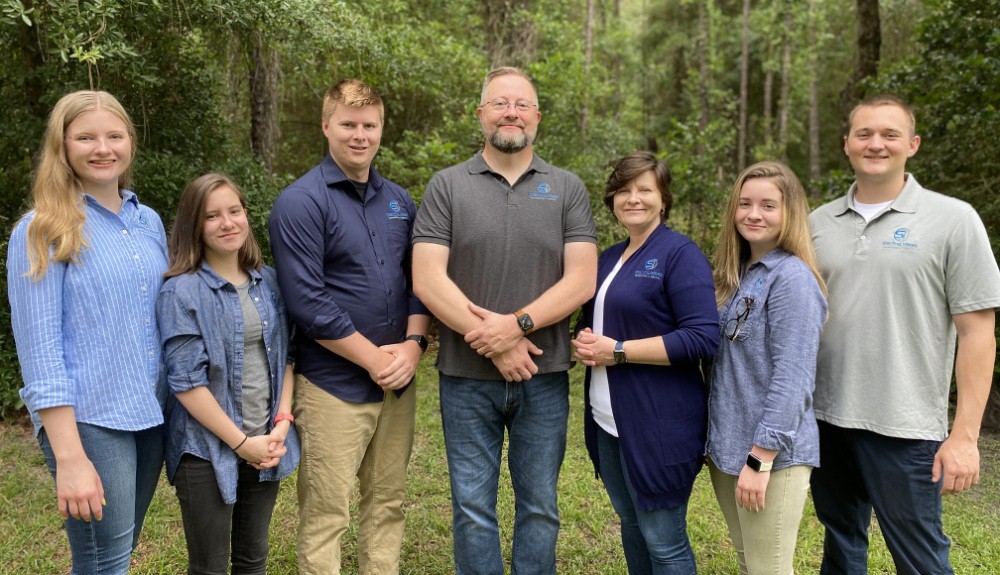 Q: Tell us a little bit about Charles and his career before establishing Sterling Ideas.

JoAnn: “Charlie’s always been a hard worker, and—certainly after the kids came along—he’s the kind of man who would do anything to provide and provide well. So he worked at some large corporations that definitely gave him great training, but because of his entrepreneurial bent, weren’t the best fit for him. He did everything from working the IT help desk to some side jobs, just fixing people’s personal computers. And I remember that back then, he’d get frustrated easily because something was always breaking, something was always needing to be fixed. To the point that when we were on our way to the hospital for Sterling to be born, some guy was calling us, asking us to stop by his house on our way to the hospital so Charles could work on his computer. That kind of thing, I’m happy to see go away. But the skills Charlie gained from working for those large companies were just absolutely necessary for the good work he does now. Because he did work for those large corporations, he was able to work with complex systems and complicated enterprise technology. It was his desire to see that same level of technology brought to small and medium businesses. It wasn’t fun to go through at the time, especially because those large corporations put him on the road a lot, so our family was separated quite often as he traveled. But looking back, those were the stepping stones to what he’s been able to do over the last 20+ years for his own clients.”
Q: What was it like to support Charles through the very beginning of the company? What kind of challenges did you face, and what made you, as a couple, decide to push through and continue working to make the company successful?

JoAnn: “Well we both value flexibility. We always have. And we knew we wanted a large family. We also knew that we wanted to be the kind of parents that, if one of our kids had a sports event or a play at the school or something like that, we wanted to be there. So the 9-5 was never going to work for us. Flexibility was always important. In the early days, it was really like being married to a doctor because sometimes, he just had to get up and go in the middle of the night to fix something that had broken. He was on the road a lot. Yeah, it was kind of like being married to a doctor and a traveling salesman, all at once. And I had to be the kind of wife, that when he said, “I have to go,” I said, “Go.” This meant at home, when he wasn’t there, I had to be strong enough to support things around the house myself. But because we work as a team and always have, it worked out. Certainly we were hoping for days when that kind of schedule was no longer, but we did what had to be done. And over the years, he has automated processes and found ways to cut down on traveling. In all honesty, going from the break/fix model to the managed services model really was a game-changer for the company, for our clients, and for us as a family. It triggered a shift from reacting to broken systems or problems to proactively guarding against issues, which means much less dropping everything to travel or middle-of-the-night problems.”

Q: Did you have any idea, at the very beginning, that there would be an entire Sterling Ideas team, of which you are a member?

JoAnn: “I dreamed of it, but I would say probably about years 10-12, I thought, “No, that’s just not going to happen.” Sterling’s desire to work with Charles is really what reopened that imagination, and I began to think that this really could be a corporation that outlives us.”

Q: How have you seen Charles, yourself, and the company change over time?

JoAnn: “Well we’ve both developed a lot of maturity. Anytime you’re meeting other people’s needs and putting those needs above your own, you learn to be both flexible and compassionate. So I think being in this line of business, where you really are just serving other people day in and day out, it really matured us. When you’re young, you tend to only look at your little sphere. When we were young, it was just us and our kids and keeping the business alive. That’s all that mattered. But now that our children have grown up, that sphere has expanded. We see how businesses influence communities, and communities influence states, and states influence our country and our world.”

Q: You’ve been an integral part of the Sterling Ideas company since the beginning, but you have worked daily at Sterling Ideas for almost 2 years now. How do you view the company differently now that you’re working here?

JoAnn: “I cannot believe that Charles and Sterling kept this going, honestly. There is so much to be done. When I first started, my biggest fear was that Charlie would make up a sham of a job for me, and I would come and sit and twiddle my thumbs and look like I was earning a paycheck. I was actually supposed to be a part-time employee, but that was short-lived. Now, I really could work 60 or 70 hours a week. My hat’s off to those two, because I have no idea how they even kept this company going, and even more than that, they did it so well. Our clients were served well and happy with their technology. It seems impossible to me that Ster and Charles did that by themselves, and not with a full-fledged team behind them.”