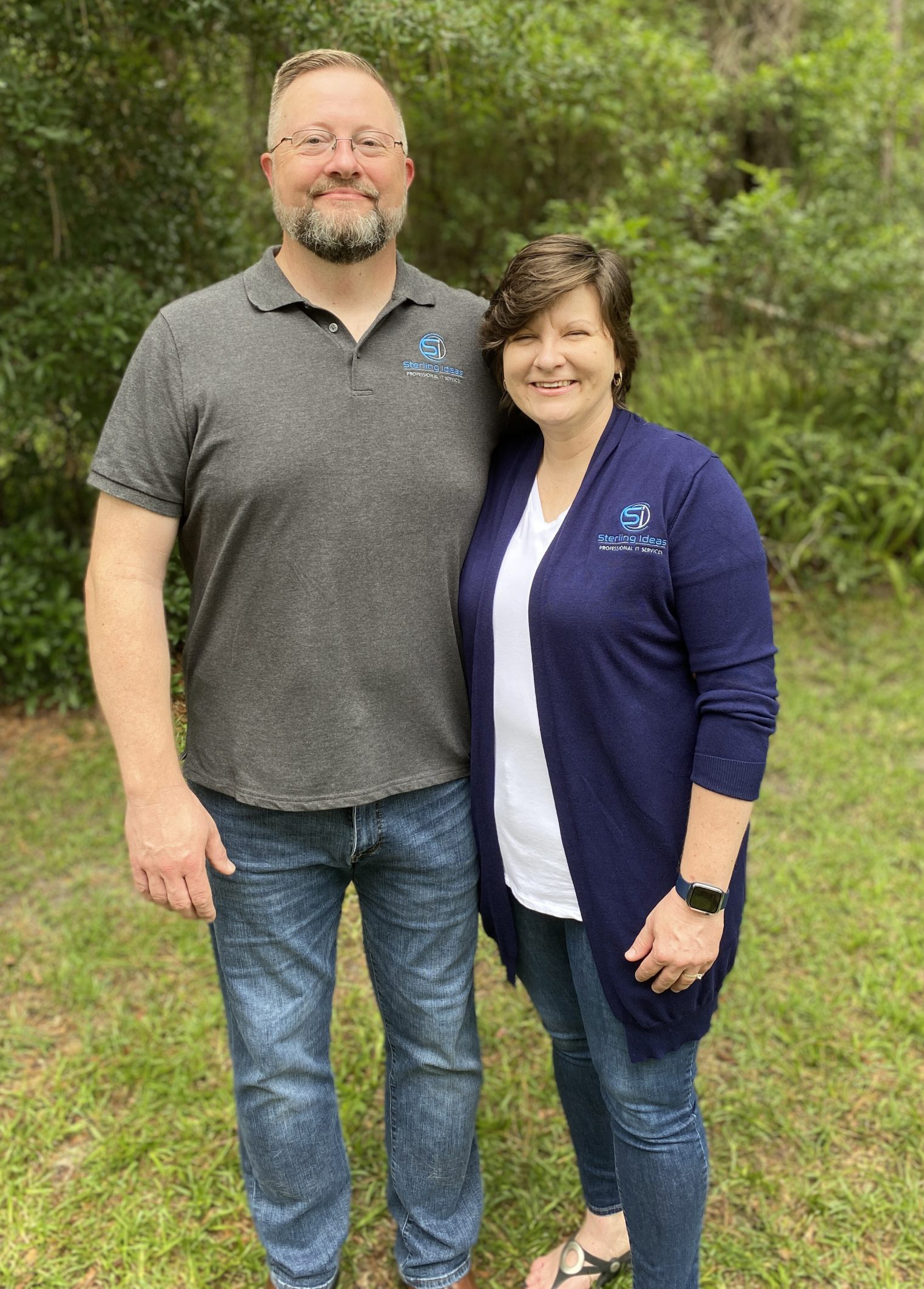 Charles and JoAnn Gardner incorporated Sterling Ideas Inc on June 30, 1999, but its real history started much earlier than that.

Charles’s interest in computers began at an early age. His father taught him not to be afraid of taking something apart to look at it. Even as a preschooler, Charles would sit on his father’s lap and “help” take apart cameras, examine the pieces, and put them back together again. A few years later, his mother surprised him with his first computer, a TRS-80. Then, like almost every child in the 80’s, he had a Commodore-128 for gaming. As Charles grew up, so did the technological world, and he saw the potential of the computer industry to provide not only for his young family but local businesses. This permission to examine and explore, lovingly given by his parents, sparked an entrepreneurial spirit within Charles that never left him.

That spirit had to wait, however. As a young husband and new father, Charles worked for several large corporations to make ends meet. During that time, he worked on complicated computer systems, learning about administration and automation. The knowledge Charles gained from managing complicated systems was exactly what he wanted to bring to small businesses, so, in the summer of 1999, he decided it was the right time to follow the entrepreneurial path and start his own business. It seemed fitting to the Gardners to honor their firstborn son Sterling by naming the company Sterling Ideas.

The beginning was hard, though. The phones didn’t ring. There weren’t any clients. No one was knocking down the door to hire Sterling Ideas. In fact, one company Charles taught for went bankrupt and left its instructors (including Charles) with thousands of dollars of unpaid pay. It was devastating to a family with young children, but Charles kept at it. Slowly but surely, God made a way for Sterling Ideas not simply to survive but thrive. Client by client, the company grew. Charles worked alone for almost two full decades, acquiring clients through honest business practices with integrity, hard work, and many late nights. It is a badge of honor that several of his original clients are still on the books today.

Sterling Ideas grew because of Charles’s desire to help other businesses succeed. Charles knew that efficient IT services that protected clients’ data would be a catalyst to small business success. As he has always believed small businesses to be the backbone of this great country, he worked hard to make sure his clients thrived.

In 2018, Sterling graduated from the University of Florida and joined his father at the family business, and Charles finally had someone to work alongside and share the day-to-day demands. There was a synergistic effect with father and son working together, and soon more and more work came their way. It was obvious that even more help was needed.

Charles hired a family friend in February of 2020 in hopes of training him to help handle some of the workload. Just a few weeks later, the Covid-19 pandemic shut the entire country down. Never had technology seemed to matter more. With businesses and schools closed, more and more people were working from home, and people’s technology needs soared. While other companies were suffering losses, Sterling Ideas was experiencing a boon.

At that time, JoAnn, a middle school English teacher of ten years, started working from home just like everyone else across the globe. It was in those quiet days when the world was waiting that she realized just how much her husband handled every day. She wanted to join him and help him. It was not an easy decision to leave teaching, but JoAnn made the choice in the spring of 2020 to retire at the end of the school year. She started working in August with Charles and Sterling in the company’s first non-technical role: Service Manager.

By the beginning of 2021 even more help was needed, and more new employees were added to the ranks. One of them was Hannah Gardner, Charles and JoAnn’s middle daughter, who began working for the company part-time while finishing up her nursing degree at the University of North Florida. Her love for order and documentation helped keep the company running smoothly.

And in January 2022, Sterling Ideas Inc joined forces with Jireh Consulting. Jireh’s owner, Todd Long, has been a faithful, trusted friend of the Gardner family for decades. Todd and Charles worked together when both were starting out in the industry, and now they are finally working alongside one another again.

Indeed, Sterling Ideas Inc continues to grow. Our company values of honesty, integrity, and hard work help the organization succeed by helping our clients thrive, just as Charles envisioned so many years ago.